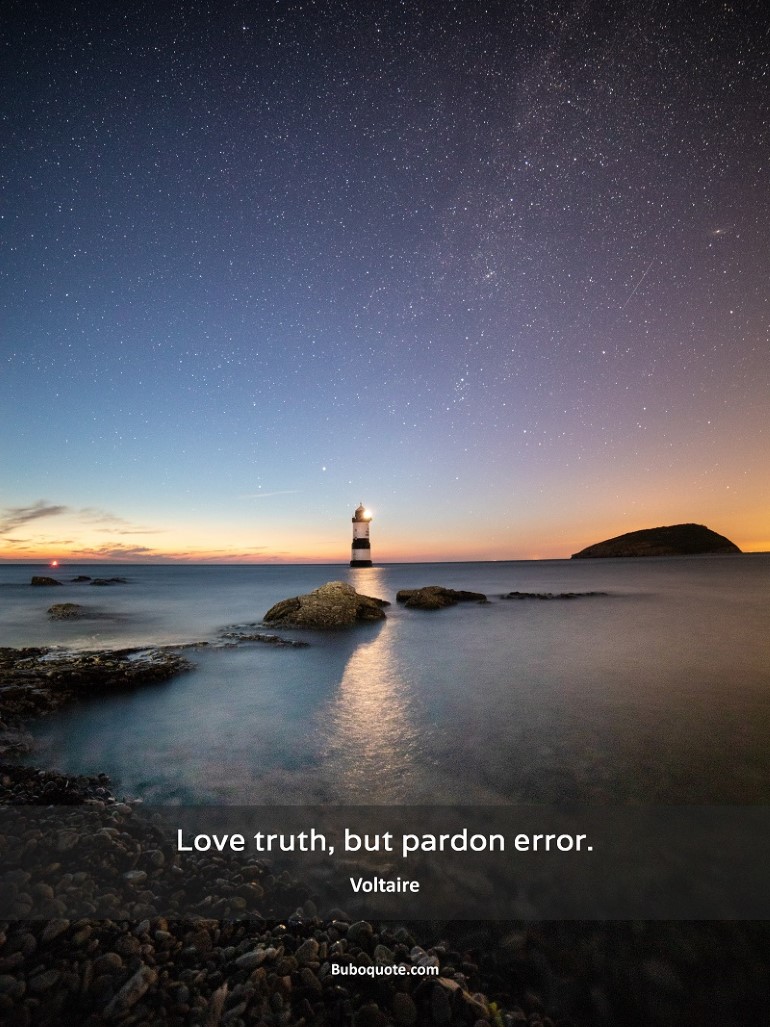 What is tolerance? It is the endowment of humanity. We are all steeped in weakness and error; let us forgive each other our stupidities, that is the first law of nature.”
Voltaire - Philosophical Dictionary

I would never die for my beliefs, because I might be wrong.”
Bertrand Russell

No one is more liable to make mistakes than he who acts only on reflection.”
Luc de Clapiers, marquis de Vauvenargues - Reflexions and Maxims

All men are liable to error and most men are, in many points, by passion or interest, under temptation to it.”
John Locke - An Essay Concerning Human Understanding

To rise from error to truth is rare and beautiful.”
Victor Hugo

Mistakes are, after all, the foundations of truth, and if a man does not know what a thing is, it is at least an increase in knowledge if he knows what it is not.”
Carl Gustav Jung

Without music, life would be a mistake.”
Friedrich Wilhelm Nietzsche - Twilight of the Idols

The only way to avoid error is ignorance.”
Jean-Jacques Rousseau - Emile, or On Education

When you find your path, you must not be afraid. You need to have sufficient courage to make mistakes.”
Paulo Coelho

The masses have never thirsted after truth. They turn aside from evidence that is not to their taste, preferring to deify error, if error seduce them. Whoever can supply them with illusions is easily their master; whoever attempts to destroy their illusions is always their victim.”
Gustave Le Bon - The Crowd: A Study of the Popular Mind

No man's error becomes his own Law; nor obliges him to persist in it.”
Thomas Hobbes - Leviathan

Freedom is not worth having if it does not connote freedom to err.”
Mahatma Gandhi

Experience is simply the name we give our mistakes.”
Oscar Wilde

Perhaps men entertain as many truths as falsehoods; have as many good qualities as bad; feel as many pleasures as pains. But we like to malign human nature, in order to try to raise ourselves above the common level, and to acquire for ourselves the respect of which we strive to rob it. We are so presumptuous, that we imagine we can separate our own personal interests from those of humanity in general, and malign the human race without implicating ourselves. This absurd vanity has filled books of philosophy with diatribes against human nature. Man is in disgrace with all thinkers, who rival one another in accusing him of depravity. But perhaps he may be about to rise again and recover all his virtues; nothing is permanent, and philosophy, like clothes, music, architecture, &c, has its vogues.”
Luc de Clapiers, marquis de Vauvenargues - Reflexions and Maxims

The history of science, like the history of all human ideas, is a history of irresponsible dreams, of obstinacy, and of error. But science is one of the very few human activities—perhaps the only one — in which errors are systematically criticized and fairly often, in time, corrected. This is why we can say that, in science, we often learn from our mistakes, and why we can speak clearly and sensibly about making progress there.”
Karl Popper

Mistakes are almost always of a sacred nature. Never try to correct them. On the contrary: rationalize them, understand them thoroughly. After that, it will be possible for you to sublimate them.”
Salvador Dalí

It is a mistake to look too far ahead. Only one link of the chain of destiny can be handled at a time.”
Winston Churchill

Intelligence is not to make no mistakes, but quickly to see how to make them good.”
Bertolt Brecht

Do not fear mistakes. You will know failure. Continue to reach out.”
Benjamin Franklin

Find quotes for: mistake in french or in german.